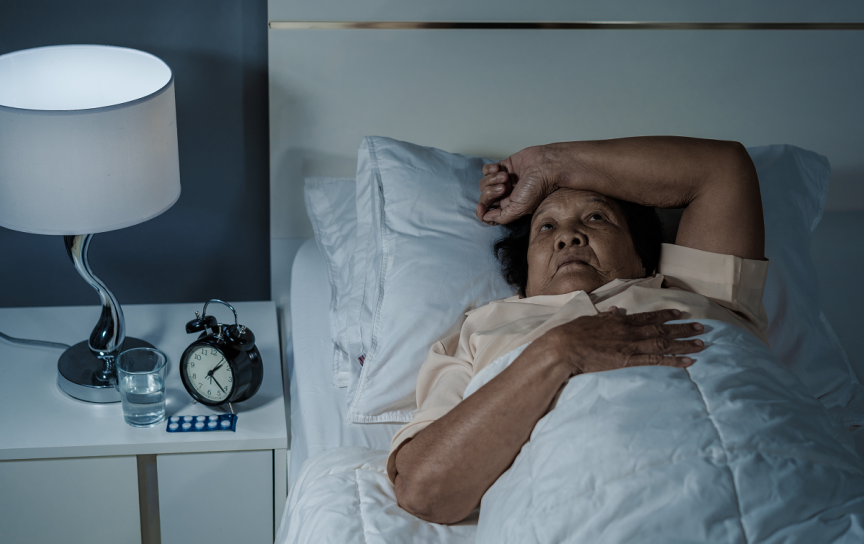 Maybe the best way to prevent depression in the elderly and others is to not talk about depression at all, but focus instead on a risk factor for depression—insomnia.

Insomnia increases the risk for depression in older adults, but a randomized, clinical trial published in JAMA Psychiatry found that focusing on cognitive behavioral therapy for insomnia (CBT-I) was more effective in both treating the sleep disorder and preventing depression than standard sleep education therapy (SET).

“In older adults with insomnia disorder but without depression, CBT-I administration provided significant benefit to prevent incident and recurrent major depressive disorder, with evidence of treatment separation beginning at six months and widening during follow-up,” Michael R. Irwin, MD, from the Cousins Center for Psychoneuroimmunology, Jane and Terry Semel Institute for Neuroscience and Human Behavior, David Geffen School of Medicine at UCLA, and colleagues wrote. “This overall benefit was generally consistent across participant subgroups. In addition, CBT-I provided benefit in sustained remission of insomnia disorder, and durable treatment of insomnia magnified the benefit of CBT-I to prevent incident and recurrent major depression.”

In fact, they noted that “[t]reatment with CBT-I yielded an annual incidence of depression at 4.1%, similar to the population rate and half the rate in SET at 8.6%, consistent with a two-fold greater risk of depression in those with insomnia.”

“The CBT-I and SET interventions were delivered by a trained psychologist (CBT-I) or trained public health educator (SET) in weekly 120-minute group sessions for two months, consistent with group format and duration of most CBT-I trials,” the study authors wrote. “The CBT-I contained five components: cognitive therapy, stimulus control, sleep restriction, sleep hygiene, and relaxation. Together these components target sleep related physiologic and cognitive arousal to reestablish restorative sleep function.” SET aims for the same outcomes but “is less robust and durable than CBT-I” they noted.

Preventing depression in the 60 years and older population is no small thing, and the study authors pointed out that this population has a 12-month prevalence for major depressive disorder “that exceeds 10% in community-dwelling, older adults and is a significant risk factor for cognitive decline, disability, medical comorbidity, and all-cause mortality, with suicide rates highest for older men. However, older adults with depression often do not receive diagnosis and treatment, and even with treatment, only approximately one-third achieve remission, with an estimated remaining disease burden of 60%.”

And they are not sleeping well. Nearly 50% of this age group having insomnia, which “contributes to a two-fold greater risk of major depression.”

Add the fact that depression in the elderly is often not diagnosed or treated, and even with treatment, Irwin and colleagues noted, only “approximately one-third achieve remission, with an estimated remaining disease burden of 60%.”

Given this chicken/egg problem, Irwin and colleagues focused on the insomnia to see if, in a population with no major depression or health events, treating insomnia would help mitigate their loss of sleep, and if that could prevent depression down the line.

Calling this approach “innovative,” Pim Cuijpers, PhD, Department of Clinical, Neuro, and Developmental Psychology, Amsterdam Public Health Research Institute, Vrije Universiteit Amsterdam, Amsterdam, the Netherlands and Charles F. Reynolds III, MD, Department of Psychiatry, University of Pittsburgh School of Medicine, Pittsburgh, noted in an accompanying editorial that the study showed that by focusing on insomnia, adults can lower the risk for depression without using the word depression, and thus skirt the attendant stigma related to the latter diagnosis.

Irwin and colleagues conducted their randomized trial, which was an assessor-blinded, parallel-group, single-site trial. After assessing a community-based sample they “enrolled 291 adults 60 years or older with insomnia disorder who had no major depression or major health events in past year.” Recruitment took place from July 1, 2021, to April 30, 2015, and when they found that there was less depression than estimated in the community sample, they extended the follow-up period from 24 to 36 months “to achieve an adequate number of events for analysis, with follow-up completion in July 2018.”

The 291 participants were randomized 1:1 to two months of CBT-1 (n=156) or SET (n=135). Incident or recurrent major depressive disorder as diagnosed by the Structured Clinical Interview of the DSM-5 every six months over 36 months was set as the primary outcome of the study. The secondary outcome was sustained remission of insomnia, which was defined as no insomnia reported at each follow-up assessment before a depression even or throughout the follow-up period.